So our final survey is also geophysics. Transient Electromagnetics or TEM allows for deeper penetration and therefore deeper imaging of the sub-surface, approximately 150m.

TEM can take quite a while to set up, but the survey is generally quite quick to run. The aim was to use the GPR to guide the laction slection for the TEM. This was possible on some occasions, but on others I had to use other information, hypotheses and inferences to guide location selection.

The set up involves laying out a copper transmitter coil, with the aim of the larger the coil the greater the penetration depth. So as often as possible, the 100m x 100m coil was used. This had to be laid out in a square, which straight away on such terrain was challenging. Disappearing over a hill so the start point is out of sight often led to diamond shaped areas that had to be corrected as best as possible. Laying this out took four os us. Yes there are three of us, so we had a huge amount of help from our driver. 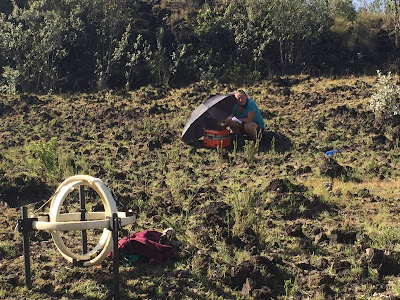 Once we were happy with the coil layout, we then had to layout and connect the transmitter, receiver coil and the receiver computer along with a preamp. Everything needs protecting form the sun and moisture, hence umbrellas and plastic bags! Not very scientific.

The principle's of TEM are based on Faraday's law of induction and Lenz's Law. The copper transmitter coil is energized by a direct current which after a time appropriate for the coil size, is quickly cut off. A nearly identical current is induced in the sub-surface to preserve the magnetic field produced as a result of the original current, or eddy currents. Ohmic losses means that the induced surface currents dissipate causing changes in the magnetic field. These changes cause subsequent eddy currents. The net result is a downward and outward diffusion of currents in the sub-surface which resemble an expanding smoke ring. The currents produce a a magnetic field, the changes (flux) at the surface of this field is measured and the way the currents diffuse in the subsurface depends on the conductivity/resistivity of the sub-surface lithologies.

I hope that makes sense!

I haven't seen any of the data produced by this survey, as it all needs processing with specialist inversion software when I return to the UK.

Our final day with the geophysics equipment involved taking everything with us. Trying to squeeze it all in the car made for an interesting half hour. 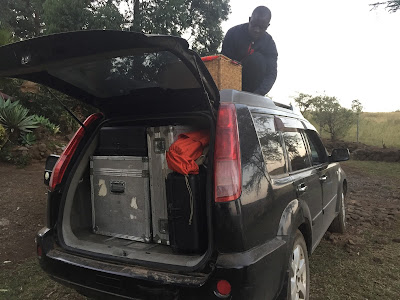 Our lunch joins the GPR antennas on the roof. We just about fit everything in. Talk about a logistical jigsaw puzzle!

The final day didn't go to plan as the transmitter didn't record a current when we first turned it on. We tried everything to eliminate the problem in the hope that we would be able to tweak the survey. Batteries changed, cables changed, coil sections checked, connections checked and even a different coil, but no luck. So after almost 4 hours of trying, we packed up with 2 TEM surveys not completed, one of which is potentially very important! Very frustrating, but what can you do?

Well that's it, all 5 surveys done in 5 weeks, with a few days off and a few big hiccups thrown in for good measure. 54 GPR seismic lines, 5 TEM surveys, 34 open extensional fractures measured, 7 fumaroles observed with 2 surveyed in detail, almost 320 CO2 efflux data sets and just shy of 700 soil gas samples collected, we are done. It is going to be a busy few months going through everything to interpret the meaning of it all.

End of fieldwork treat, we are off on a Game DRive at Nakuru National Park. Wish us luck to catch the lions who are famous for being in the trees.