After a morning of GPR surveys (see a separate blog) and seeing the best sundog, it was time to visit the direct use projects taking place in the caldera. 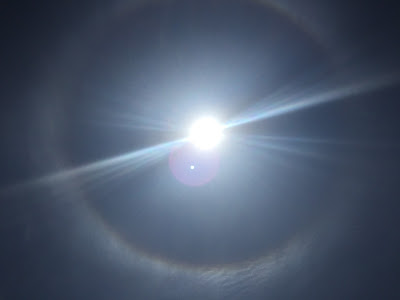 Great example of a sundog

One of the many things that the people associated with the Menengai Geothermal Project are keen to achieve is more than electricity. The team are trying to find and develop as many direct use applications as possible. Last year when I visited (girlsonfieldwork.blogspot.co.uk Day 4) There was a direct use trial involving fish and plants.

This year whilst here, not only have they further developed some of their ideas but there was an official two day launch of some of the direct use projects, with further projects given the green light.

It is very exciting to visit these projects and see the passion in the team. The applications to you and me might seem comparatively small, but what these applications could mean to the local communities around the caldera and the potential positive impact to the lives of many, is huge.

There are four direct use schemes that have just started to run in the caldera, linked together in a cascade system. The schemes have been set up on the well pad of MW-03, which is currently venting, with power generation from this well at 2-3 MW. 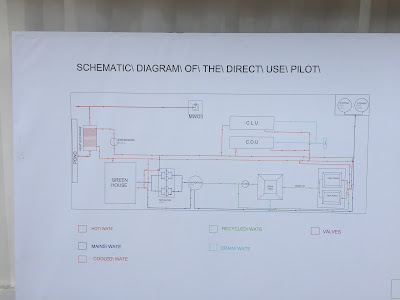 A schematic of the cascade system

Tito, who is one of the leads on the projects first explained how the heat exchanger worked. Cold water from nearby tanks arrive at the well pad under gravity and is fed in to a large coil. This coil is surrounded by super-heated brine water that is rising from the well. The interface between the super-heated water and the coil is the point of heat transfer to the cold water. The cold water is heated to around 75°C before being piped to the direct use projects. Once the brine water from the well has been used, it is transferred to a pond, where there are plans being developed for further uses. Nothing is wasted. 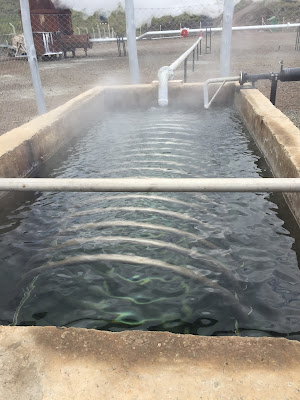 The first project is The Dairy. Here the hot water is used to pasteurise the milk. The milk is inside a drum constantly being stirred. This milk is surrounded by a jacket that is filled with the water that has been heated by the heat exchange process. Once the milk reaches a temperature of 68°C, the hot water is removes from the jacket and replaced by cold water, the milk is constantly stirred throughout the entire process. 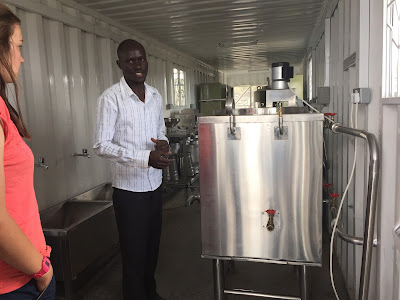 Tito talking to Mairi about The Dairy

Some of the hot water from The Dairy is then moved to the The Laundry and used to wash items in a washing machine and the heat is also used for drying. Vincent our driver volunteered his clothes to be the first washed in the 'Geothermal Laundry'.

The remaining water from The Dairy is transferred to an area where aquaculture is taking place. The water is still at a temperature of around 40°C and is mixed with cold water to lower the temperature to the optimum fish temperature of 29°C. This temperature along with feeding is carefully monitored, producing fish that grow at twice the rate of fish in 'normal' environments. I did ask if such rapid fish growth had any affects on the fish, but apparently not. It was compared to humans flourishing when they find themselves in an environment they love (our holidays on sunny beaches!). 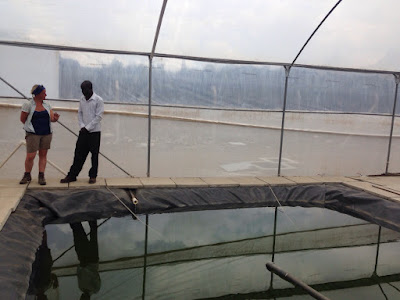 As with last year, the water from the fish tanks is filtered away carefully to keep the tanks clean. The ammonia from the fish excrement is filtered out of the water so that once again it is clean. This fish water is then used to water over 876 tomato plants inside a geothermally heated greenhouse. The greenhouse is only heated at night, as the day time sun heats it during the day. It has been estimated that each of these tomato plants will have a yield of 30kg per season, with two seasons' per year. The ammonia is diluted and used to feed the plants as the plants will extract the nitrate from the ammonia. 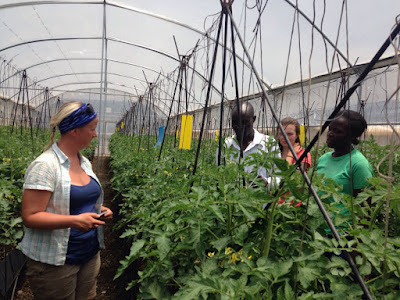 In the geothermal greenhouses

These small projects are now up and running and it is hoped that local farmers will use The Dairy and that the community will benefit from the aquaculture and agriculture methods in the very near future.
The people who live in and around the caldera do not have much, but these projects will soon help them provide further for their families, improving the lives of many.