Over the next couple of days we completed a detailed survey of the steaming grounds situated almost at the centre of the caldera, very close to the location where I believe part of the structural ring fault sits below the young lavas.

The steaming grounds and fumarole were very active last year and although the temperatures are still very high, there does not seem to be as much steam. Published isotope data has already demonstrated that the main source of the steam and therefore the main Menengai recharge source is Lake Nakuru approximately 8km to the south.

Lake Nakuru along with most of the rift lakes of Kenya and possibly parts of Ethiopia have flooded in very recent (2-3 years) and are yet to recede by a notable amount. The amount of flooding far exceeds that of the annual average rainfall for the region. The reasons for the flooding though unknown, already has hypotheses associated to the phenomena and will hopefully be investigated in the near future.

So two main hypotheses to explain why the steaming grounds and fumaroles at this locality are less vigorous in comparison to last year are (1) despite coming to the end of rainy season, it has been a much dryer few months. So the addition of  meteoric water to the system, through rainfall has dropped. This would need testing from the aspect of infiltration speeds, heating and circulation. It might be that the system circulates and heats the fluid at a rate that would not support this hypothesis. (2) MW-10 is just a few 10's of meters to the north of these steaming grounds and fumarole. It has just completed the drilling of a directional well that cuts directly beneath the steaming grounds, targeting the feature responsible for the fumarole. This will have created a conduit for the steam to escape along at a much quicker rate with less resistance.

So on to the survey. We completed a detailed grid map of a section of the steaming ground. The location for this was identified based on early morning observations of where there was a higher amount of steam escaping to the atmosphere. 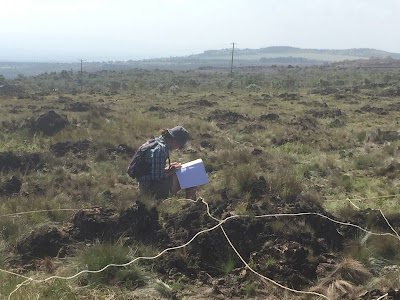 We created a 10m x 10m grid, split in to 2m x 2m squares. The GPS co-ordinates of the corners of the 10m x 10m square were recorded. Then a grid sketch was made of the key features and the positions where temperatures were recorded from, the temperatures were noted and the strike of any fractures. The highest temperature recorded during this survey at 11cm depth was just over 78 degrees Celsius. We had predicted very early on that the temperatures would be higher the closer to the fumarole we surveyed. Though this became apparent very early on, the second part of the survey actually demonstrated the ground temperatures immediately over and around the fumarole were generally lower.

In addition to the data collected as described above, we also collected three soil gas samples and data on the CO2 efflux in the centre of each 10m x 10m square. 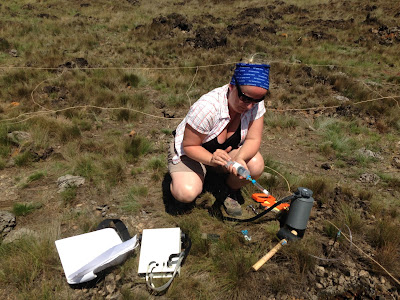 This part of the survey covered 2400m square, which due to early starts, we managed to complete in two days, including the end of the last day when we got caught in a very heavy down pour and thunderstorm. The rain drops are huge in Kenya and so cold!

The second part of the survey, originally had been planned the same as the first. However on looking at the slope and knowing the challenges we had moving the grid from one section to the next, I changed it. So instead of detailed grid mapping of the area, we did 4 transects starting at the top of the slope. 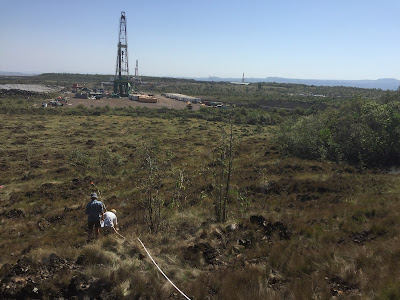 Working down slope on one of the transects, with MW-10 in the background

I hope this survey will present data that will show the changes in the shallow sub-surface behaviour of fluids and gases depending on where the samples were collected in relation to any major features, eg. a fault. From this, it should then be possible to make some inferences that due to the environment being similar, this behaviour also occurs at other fumarole localities across the caldera.

The total area covered was just under 2500 meters square. Here's hoping it worked! :-)