So after last year's fieldwork, I developed a geological map of the caldera in it's entirity. All the maps of the caldera that I have managed to find so far are from the late 50's and 60's. And though these maps are really quite beautiful in that they have been done by hand (I could look at geological maps for hours! Bit geeky? Maybe! But who cares!) Never be afraid to be yourself, and if that means you're a bit of a science nut, then so be it! You will be successful in all your endeavours and the world needs more of us!

Trying to get rock samples out of Kenya can be a challenge, as several permits are needed, the rocks need to be checked for any economic value (and if found to be so, they may be taken from you), there is of course the cost of shipping them also. So the map does not contain specific dates of individual flows, but is based on observations made in the field with regards to age relations of one flow to the next. There is some literature available with dates of some of the youngest lavas, so it is possible I could add some dates at a later stage.

The idea behind developing this map was to look at the flows and the relations with the localities of the drilled and proposed wells. The map also provided striking evidence for the possible location of a ring fault, something that has largely been inferred. In addition to this inference, inferences have also been made as to the location of faults and fracture networks. Having a good understanding of the locality of such features, especially those that are active conduits for gas and fluid movement, is of vital importance in understanding geothermal systems.

Here at Menengai, the locations of these features are largely based on inferences because any surface traces have been buried by the very young lava flows associated with the post-collapase resurgent volcanics of the Upper Menengai Sequence (McCall, 1958-1959).

So based on last years observations, map development, LiDar and satellite imagery and further research, the plans for this year are as follows:

Soil gas sampling and in situ CO2 efflux data collection - the soil gas sampling involves drawing gas form a depth of 40 cm down in to syringes, the samples are then transferred to vials. Over 300 sites have been sampled across the caldera with 2 samples collected at every site and a further third sample collected at approximately 15% of the sites. The samples will be analysed at the InVolcan labs on Tenerife, looking for quantitative values of CO2 and Helium using micro-gas chromatography and quadrupole mass spectrometry, with the third samples analysed for 13C/12C ratios using isotope mass spectrometry. These gases are the first to rise to the surface from a magmatic body and are therefore perfect gases to target. The efflux data is used to determine the amount of diffuse degassing occurring in Menengai - the degassing no one sees! Collectively this data can be used to generate sequential Gaussian simulation (sGs) maps that will identify the locality of active faults and fractures buried below the young lavas, a key requirement for geothermal development and system modelling. Further to this, the data can also be used to monitor how much CO2 Menengai is degassing naturally to the atmosphere in relation to climate change, and for volcanic risk monitoring of volcanoes that are still classed as active. 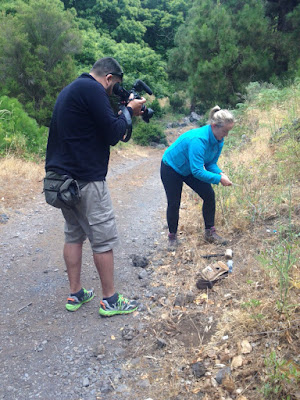 Soil gas sampling (and educational filming commitments! in the Canaries) 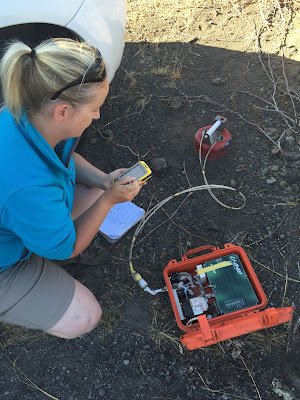 CO2 efflux data collection in the Canaries, using the accumulation method with a Leica sensor - slightly different to the sensor to be used in Menengai - but does the same job.

An active volcano does not need to be erupting to be classed as active. Any volcano that has erupted in the last 10,000 years, has shown to have ground movement (inf;ation and/or deflation) recorded by geophysics and InSar satellites and has active fumaroles, geysers and springs is classed as active.

Further surveys connected to above include detailed mapping of a steam field where soil gases will be collected, CO2 efflux data, surface temperatures and thermal imaging.

Additional surveys include Ground Penetrating Radar and Transient Electromagnetics. As neither of these surveys have been completed in Menengai before, it is very difficult to predict how the electrical signals used with behave; what the attenuation depth will actually be and how much signal scatter there might be.

I checked with GDC on arrival and found that all the surveys I have  planned to complete during this field season, have not yet been completed. This is quite exciting, as it allows for the development of further data that will complement the data already available, testing the capability and relevance of the methods and equipment to be used.

So keep watching to see how we get on.